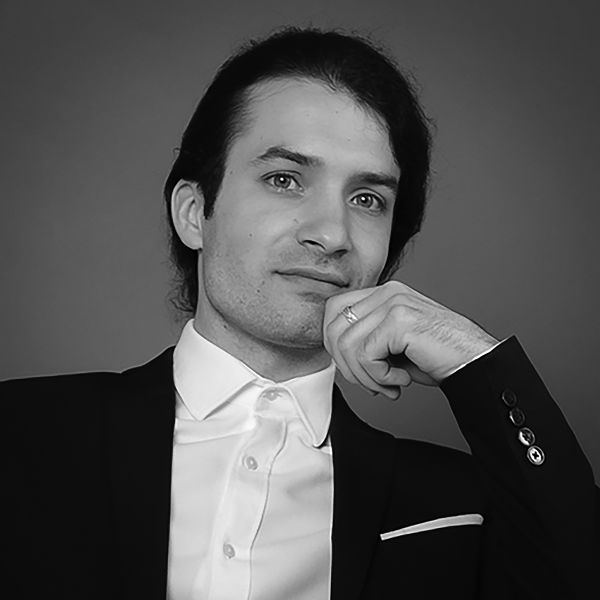 The ideas, messages, and images that the academy-trained painter Nik Anikis Skušek expresses through symbols and archetypes connect the viewer, via the collective unconscious, with the past and the history of humankind. In his paintings, characterized by classical painting techniques typical of the Renaissance, the artist articulates his reflections on the deep battles and striking contrasts in the intimate depths of an individual. To this end, Skušek employs a wide range of motifs, from portraits of people and divinities to mythological places with ruins and cosmic environments with dragons, which, through symbolism and colour, he combines into meaningful expressions of his own visions.
Holding a master’s degree in painting, Skušek already started painting as a child, when at the age of five he felt a desire to express his inner world. The brush and canvas led him to study under the mentorship of the world’s most distinguished painters in Italy, Spain, the Netherlands, the Czech Republic, France, and England, where he mastered the painting techniques he now uses to create his technically refined works, which often win international awards. During his studies at the Ljubljana Academy of Fine Arts, he developed an enthusiasm for classical and realistic painting and drawing techniques, which led him to study at the Angel Academy of Art in Florence, where he completed all three years of the programme. He continued his career as an instructor at a private academy in the Netherlands, and in 2016 he earned a master’s degree in painting in Ljubljana. His canvases, presented at many exhibitions in Slovenia and abroad, can to some extent be classified as neo-Renaissance imaginative realism, which the artist skilfully enhances with the motifs of visionary painting.
He conceives his mission of a painter as visionary work, through which he seeks to express the deeper truths of people and the universe, the truths of awakening and the magnificent beauty of humankind, which originates in the unpredictable relationship between an individual’s negative and positive potentials. He is inspired by technical perfection and the subtle expression of the human body’s beauty, which, through its poetry, expresses a wide range of emotions and truths.